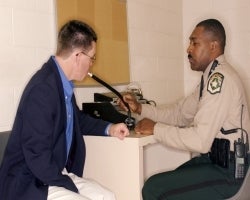 The combination of hot summer weather, holidays and the beautiful New Jersey Shore attracts many visitors which also bring increased highway traffic. Because of these opportunities, there are often many cases where drivers have had too much to drink while enjoying themselves, which can lead to a potential DWI. Driving while intoxicated offenses are seriously prosecuted in New Jersey and the consequences could not only lead to injury or harming others, but our state has some of the most sever punishments in the country.

Recently Point Pleasant police stopped a 39 year-old woman from Stony Point, New York at the intersection of Route 88 and Johnson Avenue. The woman was arrested and charged with DWI and reckless driving after she refused to submit to breath test, which is a separate offense in New Jersey. Under New Jersey state law any driver who receives a NJ driver's license or operates a vehicle on a state road has submitted to implied consent which requires a driver to submit to a breath test when accused of drunk driving. If a driver refuses to provide a breath test they will be charge with refusal which is in addition to a drunk driving or reckless driving charge.

39:4-50.2-Consent to taking of samples of breath; record of test; independent test; prohibition of use of force; informing accused.

2. (a) Any person who operates a motor vehicle on any public road, street or highway or quasi-public area in this State shall be deemed to have given his consent to the taking of samples of his breath for the purpose of making chemical tests to determine the content of alcohol in his blood; provided, however, that the taking of samples is made in accordance with the provisions of this act and at the request of a police officer who has reasonable grounds to believe that such person has been operating a motor vehicle in violation of the provisions of R.S.39:4-50 or section 1 of P.L.1992, c.189 (C.39:4-50.14).

(b) A record of the taking of any such sample, disclosing the date and time thereof, as well as the result of any chemical test, shall be made and a copy thereof, upon his request, shall be furnished or made available to the person so tested.

(c) In addition to the samples taken and tests made at the direction of a police officer hereunder, the person tested shall be permitted to have such samples taken and chemical tests of his breath, urine or blood made by a person or physician of his own selection.

(d) The police officer shall inform the person tested of his rights under subsections (b) and (c) of this section.

(e) No chemical test, as provided in this section, or specimen necessary thereto, may be made or taken forcibly and against physical resistance thereto by the defendant. The police officer shall, however, inform the person arrested of the consequences of refusing to submit to such test in accordance with section 2 of this amendatory and supplementary act. A standard statement, prepared by the chief administrator, shall be read by the police officer to the person under arrest.

Penalties for failure/refusal to provide a breath sample in New Jersey:

There are several important points to understand under N.J.S.A. 39: 4-50.2. First, Police officers are  required ask again before  reading a refusal form to anyone who refuses to submit to breath tests at the time they are stopped for suspicion of DWI. You could be charged with refusing as  the result of remaining silent, being unclear, expressly saying no or even by consenting but trying to tamper with the sample by not being cooperative.

Speak With A DWI Defense Attorney

Despite refusal charges presenting a difficult situation for those charged, there are defenses that can be raised through legal representation. If you or someone you know has been charged with drunk or dangerous driving and has incurred additional charge of refusing to take a breath test in New Jersey, please contact the experienced criminal and traffic defense lawyers of Villani & DeLuca. Our founding Partner Carmine R. Villani, Esq., has received training on how to administer both breath and standardized field sobriety testing. Additionally he has served as a former municipal prosecutor and public defender for numerous municipalities in Ocean and Monmouth counties. Call us today to speak about your case (732) 965-3999 and schedule your FREE consultation!