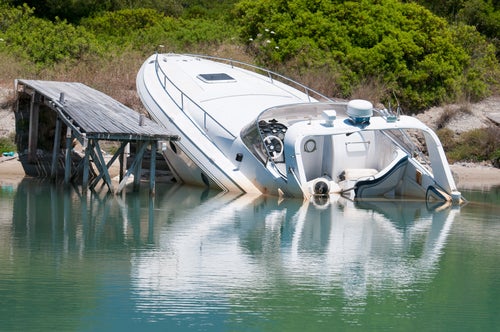 In New Jersey the traffic offense of driving while intoxicated (DWI) is not limited to motor vehicles on the road. It can also apply to boats operating on the waterways surrounding New Jersey. Boating While Intoxicated (BWI) or Boating Under The Influence (BUI) are just as dangerous as a person driving recklessly on a street. A boat operator who may be impaired is not only endangering themselves, but also other boaters, jet-skiers, swimmers and anyone else who might be on the water at the time of the infraction.

Lawful Operation Of A Boat In New Jersey

To lawfully operate a boat in the New Jersey waterways, they first must complete a New Jersey State Police certified coarse in boating safety and receive a New Jersey Boating Safety Course Certificate. The operator of the boat must be at least 16-years-old and, if under 17, the individual must be accompanied by a parent or guardian.

A person operating a boat is held to the same standards as someone behind the wheel of a car. It is illegal for a person to operate a boat while impaired from alcohol or drugs. It is the job of the New Jersey State Police Marine Service Bureau and the US Coast Guard to police the waterways around New Jersey. If stopped for suspicion of a BWI or BUI the captain of the boat must submit to the same field sobriety test as someone being stopped in a car. The captain of the boat may also have to submit to a Breathalyzer test to determine their blood alcohol content (BAC). The driver is obligated under the law of implied consent to submit to Breathalyzer and field sobriety tests if asked to do so by a law enforcement officer. Failing to take the test will result in another charge called refusal which, won't alter the fact that you still are faced with a DWI.

Penalties For Boating Under The Influence In New Jersey

For a first offense of BWI/BUI in a boat with a BAC that is 0.08% to 0.09%, the boat operator is subject to a suspension of his or her boating license for one year and a suspension of motor vehicle driving privileges for three months. There will be a fine of between $250 and $400. The driver will have to pay fees including $230 for the Intoxicated Driver Resource Center (IDRC), and a $1,000 surcharge per year for three years. There might also be a jail term of up to 30 days.

If, for the first offense, the BAC registers 0.10% or above the penalties rise significantly. The license suspension from driving a boat will be for one year and the driver's license for a motor vehicle will be suspended for seven months to one year. The fine increases to between $300 and $500 and the other fees and surcharges are the same as for the lower tier first offense BWI as is the potential jail time.

For a second offense within ten years of the first, both the boating privileges and driver's license will be suspended for two years. The fine will be between $500 and $1,000 and the other fees and surcharges remain the same. There is the chance that the offender will receive jail time as a punishment ranging from two to ninety days along wit hthe possibility of thirty days of community service.

For the third offense within ten years of the second offense, the license for operating a boat and a motor vehicle will be suspended for ten years. The fine will be $1,000 with the same IDRC and fees as for the second offense. The surcharges will rise to $1,500 each year for three years with the possibility of six months in jail. There could also be as many as ninety days of community service issued by the judge upon a third or subsequent BWI conviction.

The attorneys at Villani & DeLuca, P.C. are avid boaters and have over 20 years of experience handling DWI matters throughout New Jersey. Call 732-372-0820 today for your FREE initial consultation with one of the office's experienced Boating While Intoxicated lawyers.