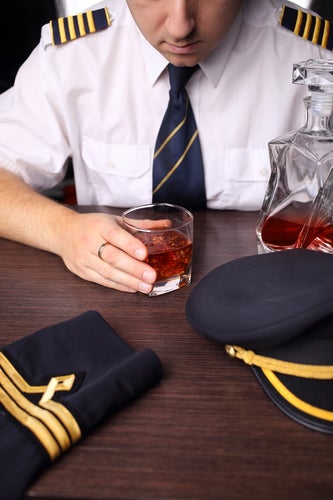 In New Jersey, penalties for the traffic offense of driving while intoxicated (DWI) can range from license suspension, significant fines, surcharges, raised insurance rates, jail time and the requirement that an ignition interlock device be installed on the individual's vehicle.

The penalties for a pilot who is charged with DWI in a vehicle on the road or for flying under the influence (FUI) or flying while intoxicated (FWI) are significant and can also affect his or her employment. A pilot is subject to a different set of rules than a non-pilot because of the serious responsibility that comes with flying. In short, a pilot is held to a higher standard and runs a greater risk to their livelihood if they commit a DUI/DWI or FUI/FWI.

Penalties For Pilots Convicted Of DWI/FWI

The Federal Aviation Administration (FAA) has strict rules regarding any crew member of a commercial or private aircraft consuming alcohol or any substance that can result in a failed sobriety test. If a pilot or crew member consumes alcohol within eight hours of a scheduled flight, works while under the influence of drugs or alcohol, or registers as having a blood alcohol content (BAC) of 0.04% or higher there can be a charge of flying under the influence. In the event of a conviction, the pilot or crew member will be subject to fines, jail time, having their pilot's license suspended and losing his or her job.

Pilots are subject to the same implied consent rule as drivers and must submit to a chemical test to determine the amount of alcohol or drugs, if any, is in their system if requested to do so by law enforcement. The rules of refusal are similar to the rules of refusal for a New Jersey driver and there is the possibility of a license suspension and fines.

If a pilot is arrested, charged and convicted with a DWI in New Jersey, there is an obligation to inform the Civil Action Security Division and the FAA on the individual's first class medical application. This must be done within 60 days following the conviction of a DWI. If the pilot doesn't inform the FAA or the Civil Action Security Division, it puts the pilot in jeopardy of penalties such as probation and other punishments. If there is a suspension of the pilot's license two times within three years an application for a pilot's license can be rejected or a current license can be revoked.

If you are a pilot and need legal representation for DWI or Flying While Intoxicated (FWI) in New Jersey, contact Villani & DeLuca at 732-372-0820 for a FREE consultation.