Do NJ DWI Laws Need to Be Stricter? 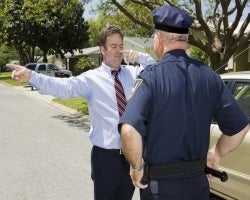 A 23-year-old driver killed two grandparents in New Jersey in a head-on collision. Not only was the man driving on a suspended license, but he was also driving under the influence of alcohol. Even worse, this was not his first drunk driving offense.

This case has spurred controversy among both drunk driving crash victim advocates and DWI defense lawyers. In particular, a group called Mothers Against Drunk Driving (“MADD”) illuminated the fact that over half of suspended drivers in New Jersey continue to drive despite their suspension. MADD in one of its reports ranked NJ as one of the worst states for protecting the victims of drunk driving incidents. MADD demonstrated that New Jersey laws do not allow for immediate confiscation of drunk drivers' licenses, do not prevent drunk drivers from refusing breath tests, and do not require ignition interlock devices for all offenders. MADD especially advocates for wider legally mandated use of ignition interlock devices after a driver's first DWI offense. On the other hand, lawyers representing DWI defendants maintain that fines are too costly for drivers and that the process of prosecuting drunk drivers violates their constitutional rights.  Overall, both supporters and opponents agree that New Jersey's punishment system for DWI offenders is not functioning properly.

Should Drunk Driving Laws Be Stricter?

Many argue that New Jersey needs more stringent laws to keep repeat offenders from driving drunk. In New Jersey, repeat offenders face exorbitant fines while, in other states, repeat offenders will face more jail time. New Jersey is one of a few states in the country that does not consider drunk driving a criminal offense and the state places more focus on monetary sanctions rather than jail time. These fines, fees, and surcharges have increased in recent years. By contrast, in states such as Pennsylvania, repeat offenders can be put in prison for up to two years. Under New Jersey law third time offenders face up to 180 days in jail and part of this term can be served in rehab. New Jersey DWI offenders are also not afforded the right to a trial by jury because drunk driving is not considered a criminal offense in New Jersey. Attorneys for the State argue that the penalties for DWI offenses are not punitive enough, do not make the offense a crime, and that holding jury trials for DWI cases will overburden the state's court system.

Speak with a DWI Defense Lawyer

Even though there is much disagreement about how the state of New Jersey currently handles drunk driving offenses, there's no question that being arrested for DWI can be an overwhelming experience. The potential for a first or subsequent DWI charge to have very harsh consequences is why anyone in this position should seek representation by a New Jersey DWI lawyer.