The Difficulty Of The Field Sobriety Test 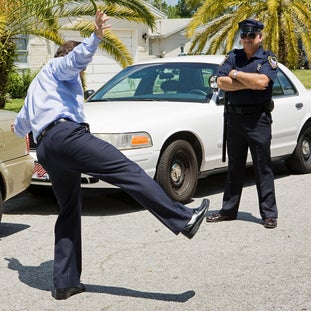 There are certain roads in New Jersey that locals are aware of as being a hot spot for police officers and traffic stops. For example, Route 71 in Monmouth County runs through numerous New Jersey Shore towns including Brielle, Spring Lake, Belmar and Bradley Beach. It seems like every time I drive this route I see at least one car pulled over for some form of a traffic infraction. If it is late at night and you see the police lights flashing behind you, it's pretty certain that the police will be questioning you for DUI and ask you to perform a Standardize Field Sobriety Test (SFST). The problem with the SFST is that it is not scientifically proven to be accurate and is a relatively poor measurement of sobriety, for one thing. For another, critics contend it is designed to fail. Many drivers are unfit to take the test and the scientific rigor behind it is questionable. The SFST can only provide a gage for the police officer to judge whether or not they think you are impaired. Even for a sober person, this can be a daunting task to perform. Try performing the One Leg Stand in your home and see how under optimal conditions it is still difficult. Some of these tests are difficult to pass even with no alcohol in one's system. During this test you are expected to stand on one leg, with your other foot a few inches off the ground, pointing your toes out, while watching your leg and counting to thirty. While you are performing this test the police officer is looking to see if you are swaying, trying to use your arms for balance, and judging your ability to count to 30 while standing in one place. There are many other factors that can also affect the outcome of this test. You could have a medical condition that makes this very difficult such as a knee problem, vertigo, arthritis and inner ear issues to name a few. Another thing that can affect the test includes the environment. Is the ground you are standing on level? Is it raining or snowing out? Are you on the edge of a busy highway? Not to mention the nervousness of being accused of DUI can cause a person to have difficulty time performing these test. Read further to familiarize yourself with the Standardized Field Sobriety Test that they use in New Jersey.

The series of field sobriety tests consists of three elements. The first test is the horizontal gaze nystagmus, in which a driver stares straight ahead and a police officer monitors his or her eyes. If the accused eyes move involuntarily or flicker, this is taken as evidence of intoxication. This is generally considered the most “scientific” of the three tests, but is still of questionable validity.

The other two parts of the testing, which are more familiar to most people, involve balance, coordination and the ability to follow instructions. In the “walk and turn” test, the driver is instructed to walk in a straight line, heel-to-toe, for nine steps while counting each step. The driver must then turn with a series of small steps and repeat the process, returning to the starting point. The driver is not allowed to stop to regain balance or orientation. The test involves eight “clues” the officer looks for to determine if the driver is intoxicated.

This test is highly problematic. For one thing, it assumes a high degree of coordination and balance. Many people can't walk such a tight, straight line even when sober. The elderly, disabled, overweight and sick are especially disadvantaged. Vertigo, hypoglycemia and any number of other conditions affect balance and coordination, and could contribute to an unjust arrest. This test is designed as a “divided attention” device, meaning it forces drivers to focus both their mental and physical faculties at the same time. Not every driver is competent enough to do this with the required precision. Most important, police frequently fail to administer the test properly. The biggest mistake is the failure to provide a straight line. They may also neglect to score the test properly and may administer it on an inappropriate surface such as a soft ground, under wet, slippery or uneven conditions.

The final component of the standardized field sobriety test is the one-legged stand. Here, the driver is told to stand on one leg while raising the other six inches off of the ground, with toes pointed straight, while counting out loud for thirty seconds until instructed to stop. If the driver fails two of four “clues,” he or she fails. They include extending arms for balance, swaying, hopping and dropping his or her foot.

This test serves essentially the same purpose as the walk and turn: It attempts to judge whether you can maintain balance and coordination while following instructions that focus your mental attention. As with the walk and turn, elderly people, people with certain illnesses and disabilities, and people who are overweight suffer a marked disadvantage in this test.

The science behind these balance tests is questionable. With the appropriate rigor, they may serve as a valid screening device to determine whether an arrest can be made and additional evidence gathered. Indeed, that's how they're usually used, while the accompanying breath test is used to obtain a conviction. But the necessary level of rigor frequently isn't applied to the balance tests by police, prosecutors or judges.

That's where an attorney like those at Villani & DeLuca can make all the difference in challenging your case in court. If you have been charged with DWI after submitting to the Standardized Field Sobriety Test, it is important that you obtain help from a knowledgeable and SFST trained attorney. The lawyers at Villani & DeLuca have been trained in important DWI-related topics like the Alcotest breathalyzer device and standardized field sobriety testing. Call the firm today at 732-965-3999 for your FREE consultation!