A Driver With Suspended License Kills Woman in Brick 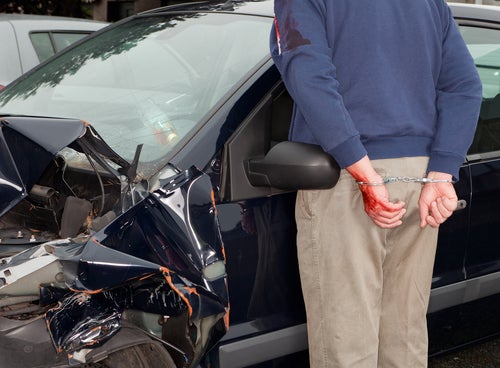 While conducting an investigation, officers from the New Jersey State Police Crime Suppression Unit witnessed a drug deal in Trenton. As they attempted to pull over a Chevy Trailblazer, the driver fled the scene. Officers pursued the vehicle until reaching the Whitehorse Circle in Hamilton Township. The driver continued on and ran a red light at the intersection of Broad Street and Park Avenue. The Trailblazer collided with a Honda Civic as the Civic was turning left onto Park Avenue. The Civic then hit a telephone pole and the 22 year old driver was killed.

The driver of the Trailblazer exited the vehicle and ran from the scene but was later captured. Police reported that when he was apprehended, he was in possession of heroin. He has been charged with drug possession, death by auto while under the influence of a controlled dangerous substance, leaving the scene of an accident involving death, assault by auto, causing a death while driving with a suspended license and eluding police.

There were two other individuals in the Trailblazer and they sustained minor injuries from the accident. Heroin was found in the vehicle as well, and the two passengers have been charged with possession of a controlled dangerous substance.

If someone is injured or killed while you are driving with a suspended license, it is considered a third degree crime. For a conviction of a third degree crime in New Jersey, you can be sentenced to 3-5 years in prison and can be fined up to $15,000. A jail sentence is required even if it is your first offense. Additional charges, such as death by auto, can be brought against you.

Charged with Driving While Suspended in New Jersey?

Depending on the circumstances of your case, you could be facing significant fines and jail or prison. The experienced attorney's at Villani & DeLuca, P.C. can assist you in defending these charges. Call 732-800-2980 today for a free consultation.